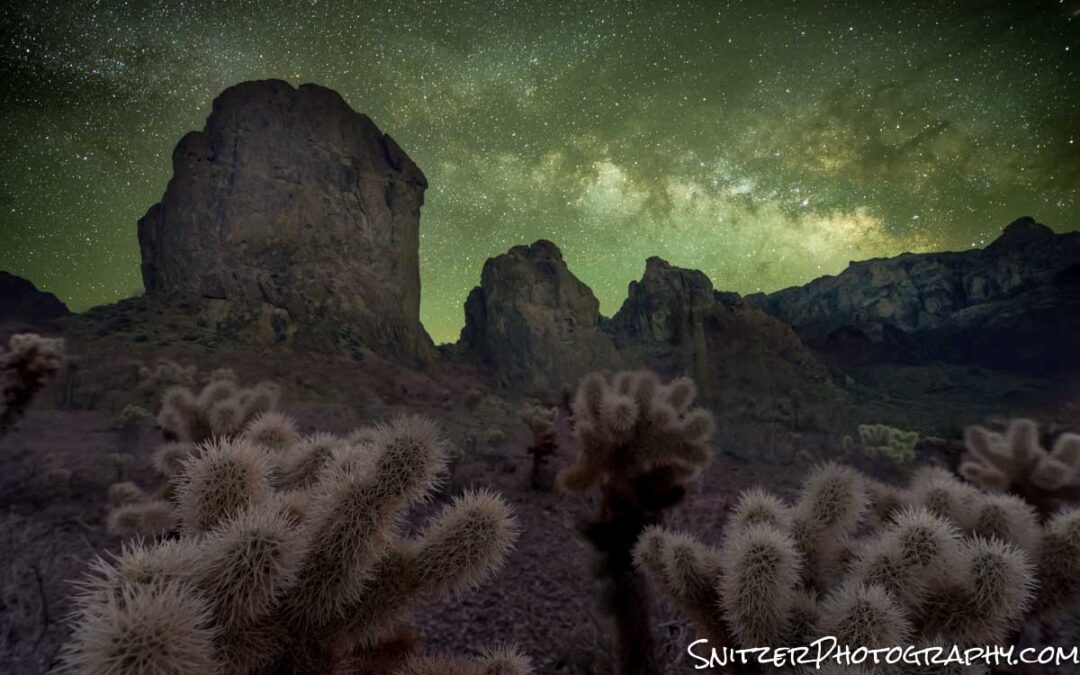 I’ve never had the chance to photograph some of my favorite Colo Mntn spots covered in snow.  Ergo the San Juan Mountains located in Southwest Colo (think Telluride/Crested Butte).

For instance, I’ve shot Mount Sneffeles many times, but getting back there in the winter isn’t easy. Requires a snowcat or a Jeep with some massive tires. Worth the effort! 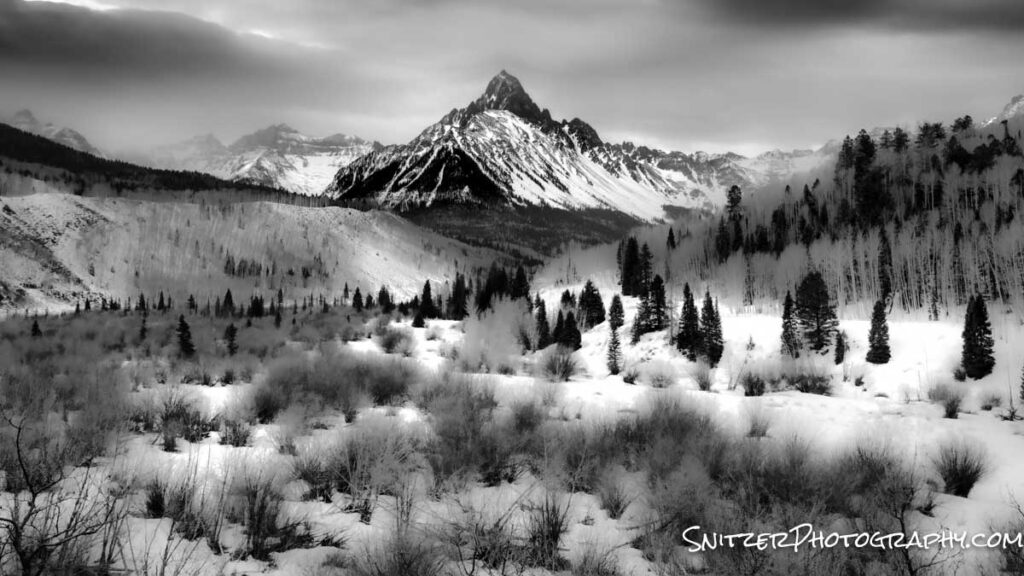 BTW there are more uncharted jeep roads (with about 2ft of untracked snow on them) to explore. The shot below was taken with a drone (about 30ft above the road). 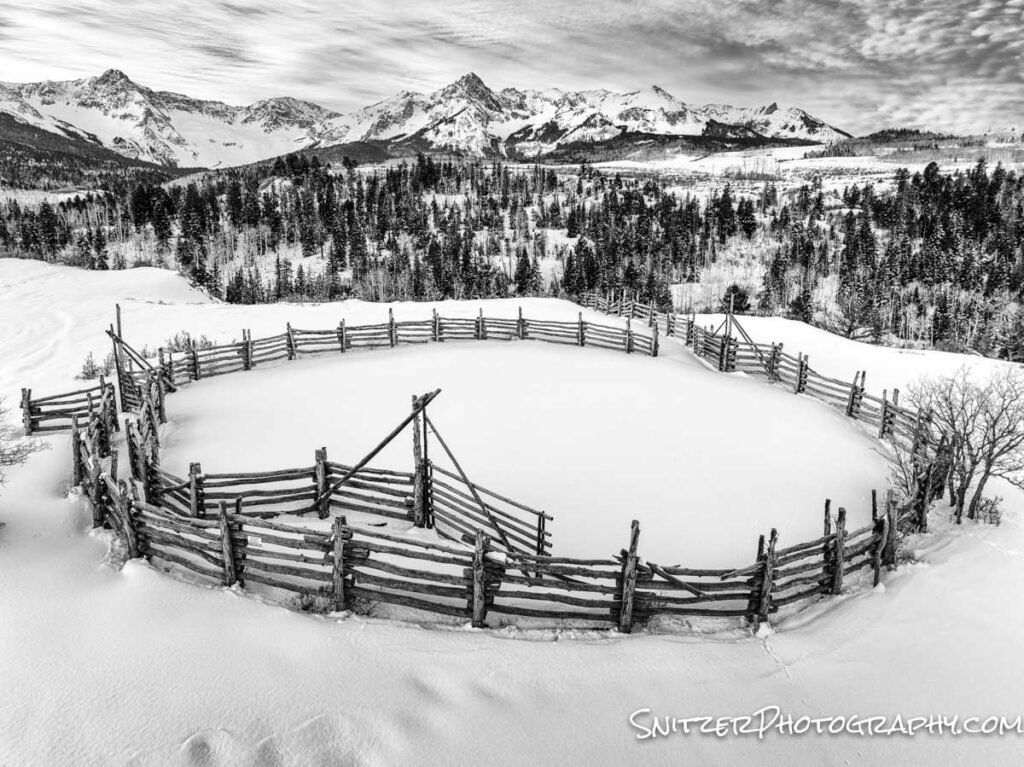 The drone provides a pretty unique perspective when the sun is about to set. Love the shadows! 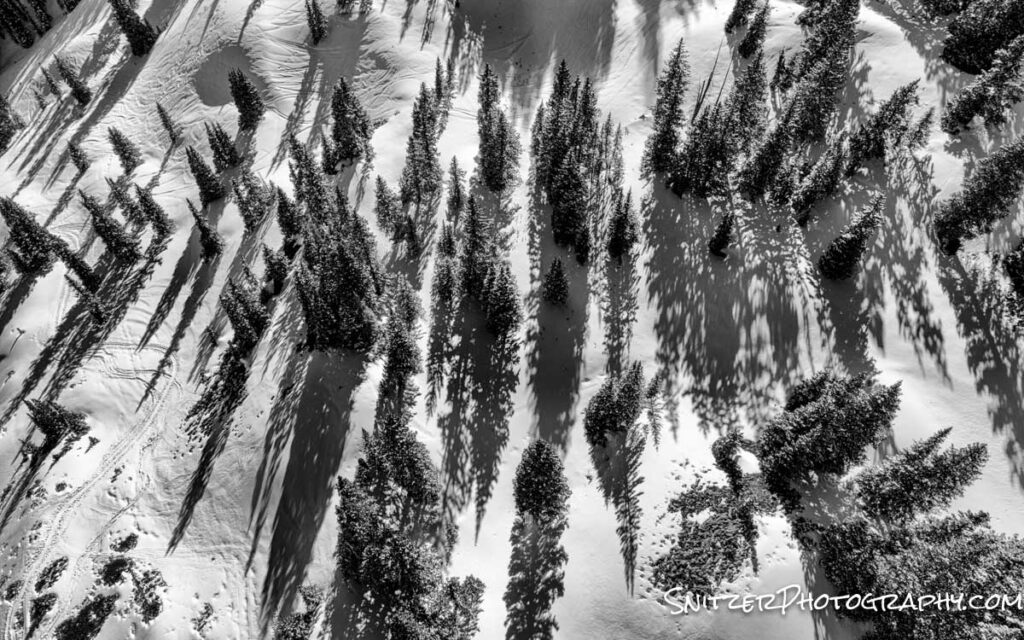 Speaking of sunset, it was full moon time on my trip. Everything lined up just right! 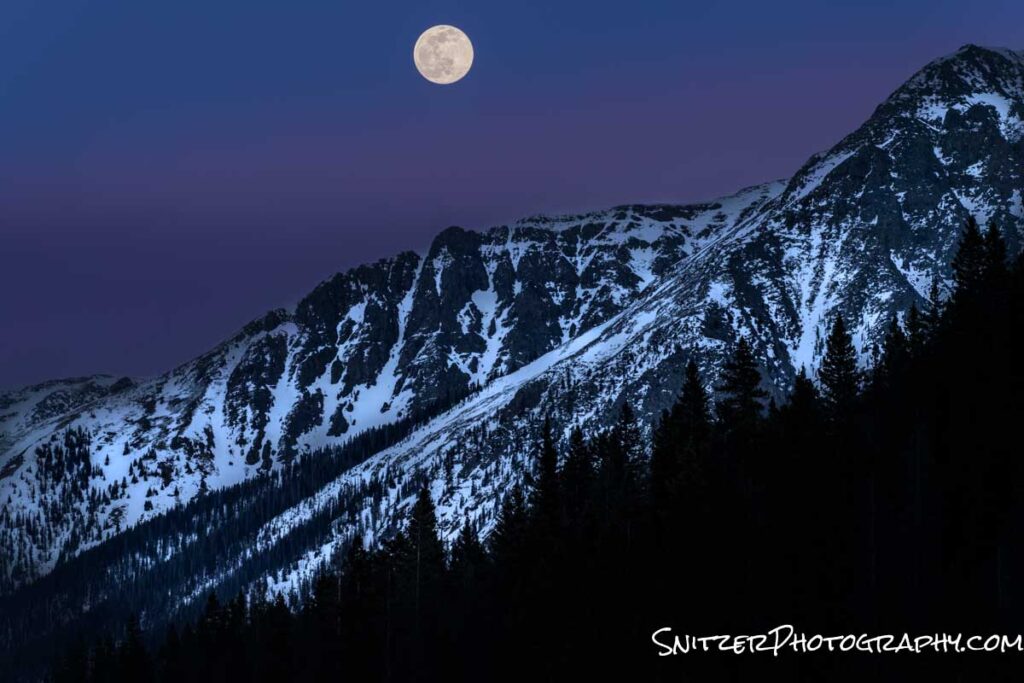 The two shots below were both taken about 35 minutes before sunrise (just outside the town of Ridgeway). 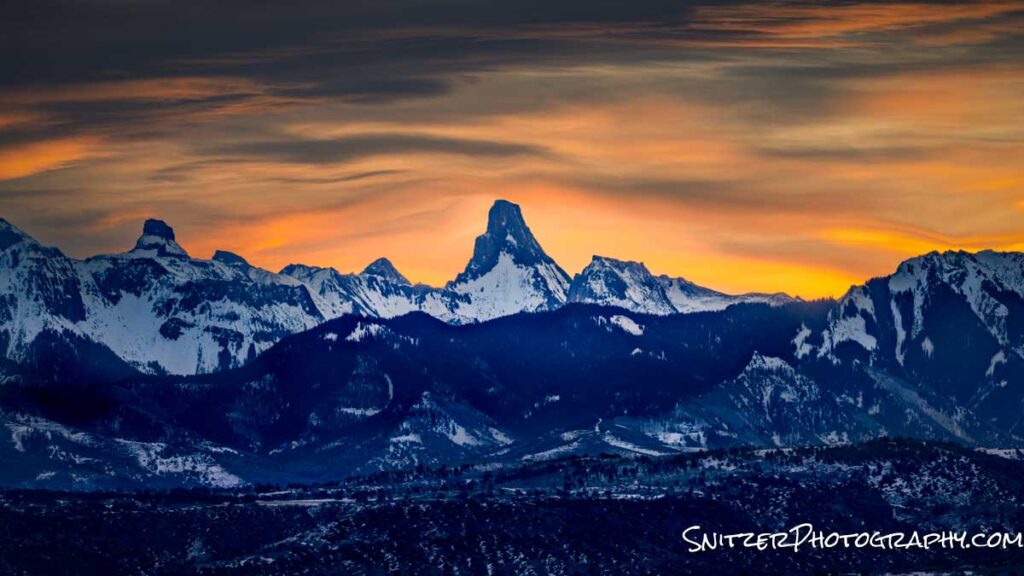 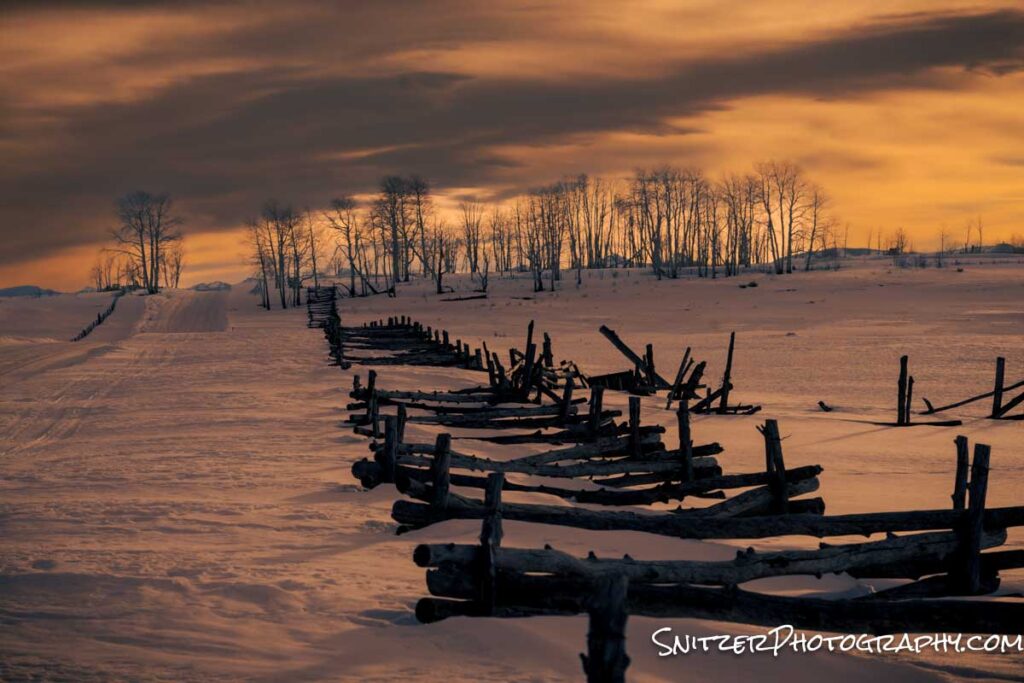 Interesting, how different some iconic views look when covered with the white stuff! 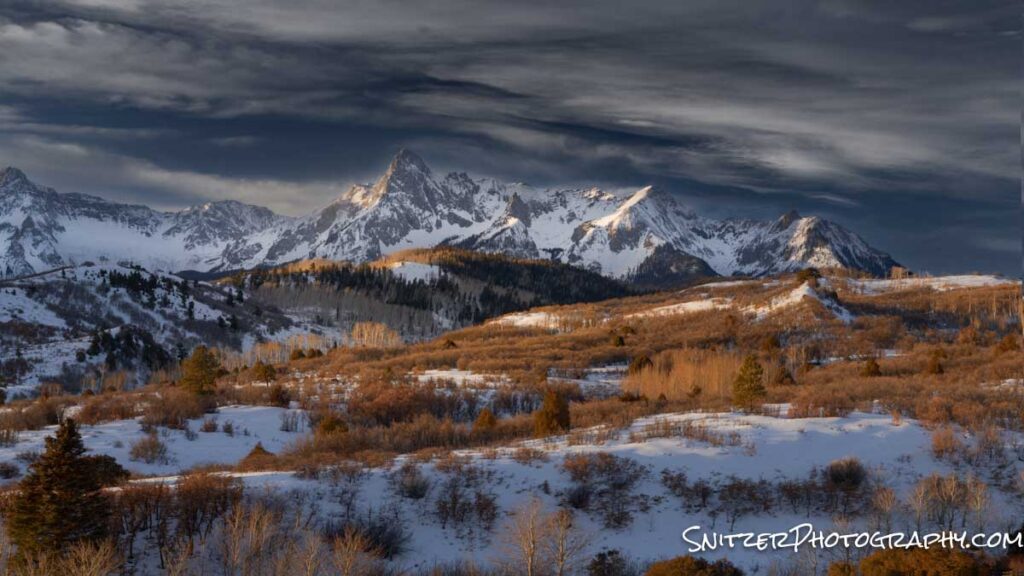 Then there are those crazy (& I do mean crazy) ice climbers. This dude was going up an 800ft high ice flow (just outside of Ouray, Colo). Any fall would be a game-changer (& not for the good). 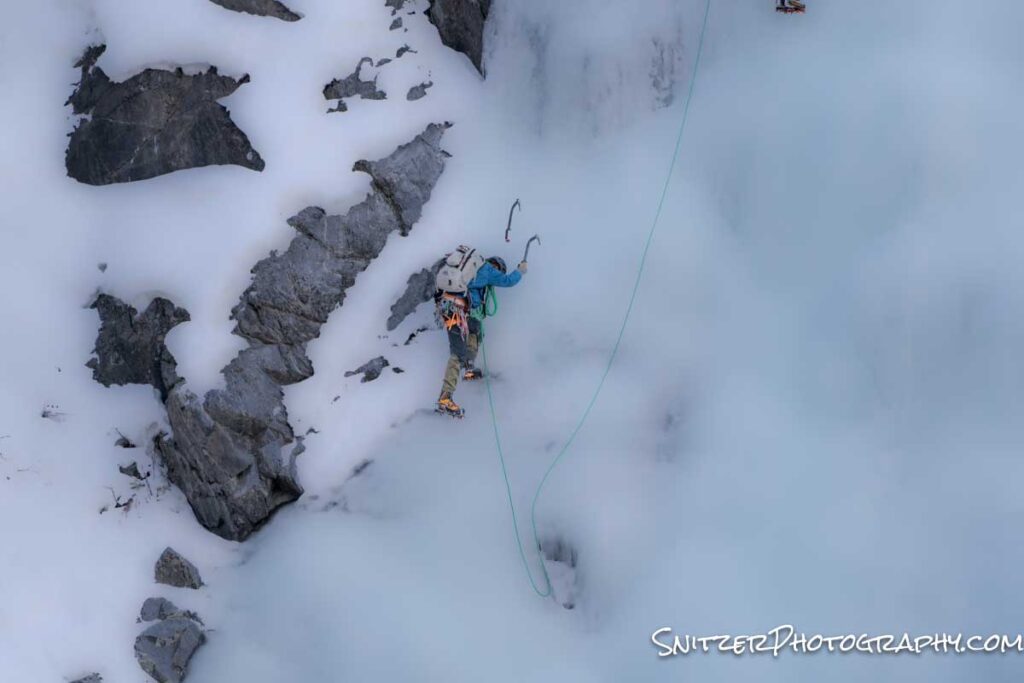 Next stop, the Moab area (which includes Arches and Canyonland NPs).

A previously hidden view I discovered while flying the drone. I had no idea what this plateau looked like till I got approx. 800 ft above the trailhead. 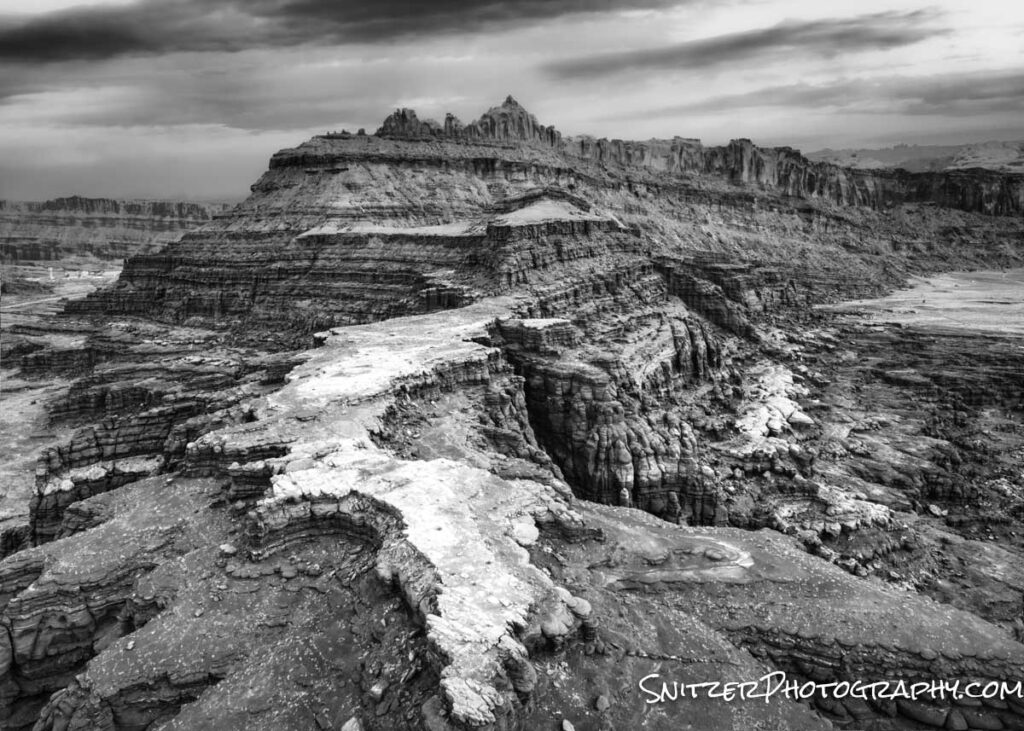 The photo below (Arches NP) looks like it’s taken at a lake. Nope, the image was created by getting down really low and photographing across a 3 x 4ft pond. 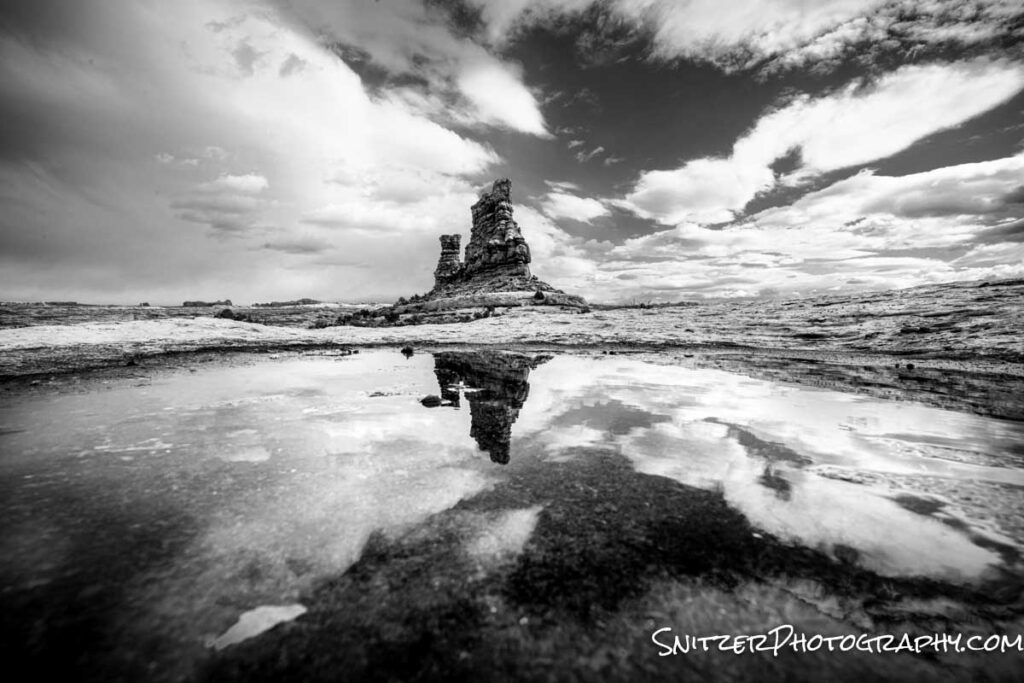 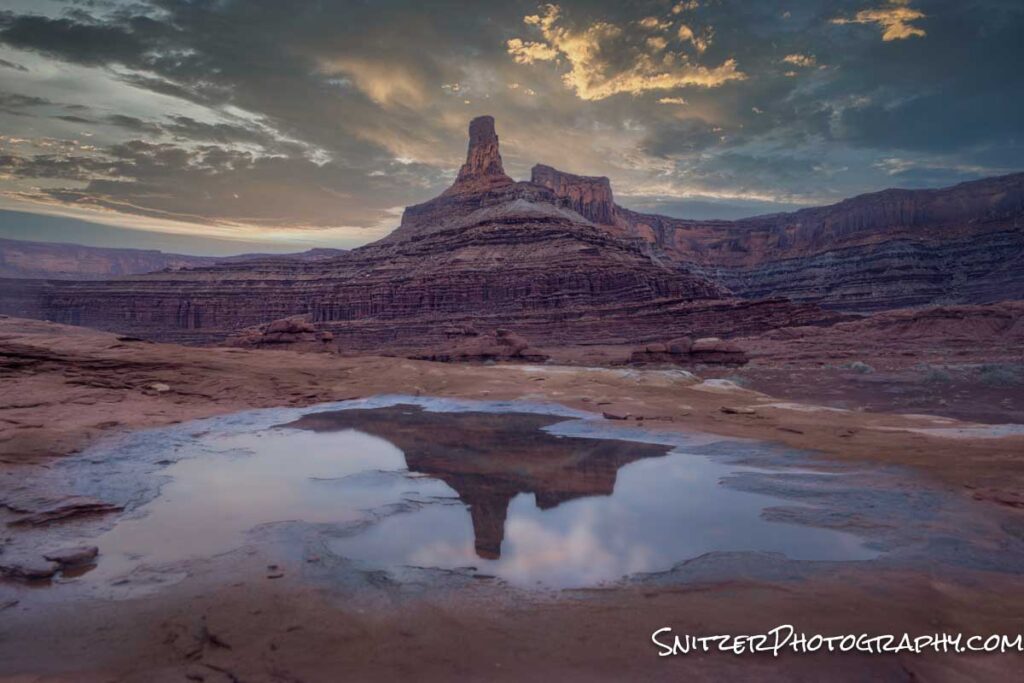 Yes, every so often you can find a waterfall in the desert! 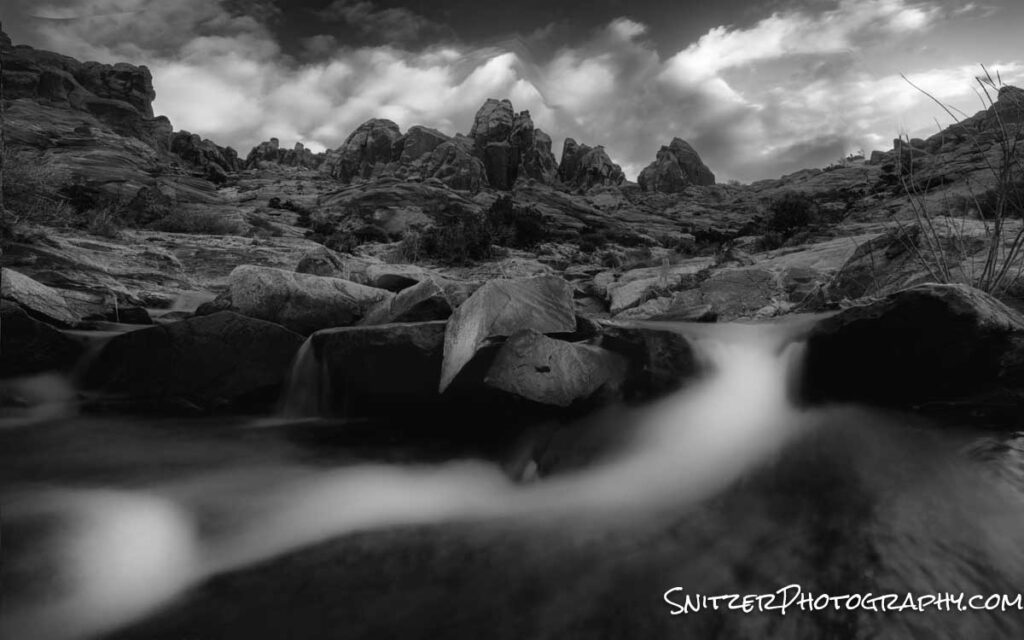 This place is aptly named Goosenecks State Park. Looks even better from above. 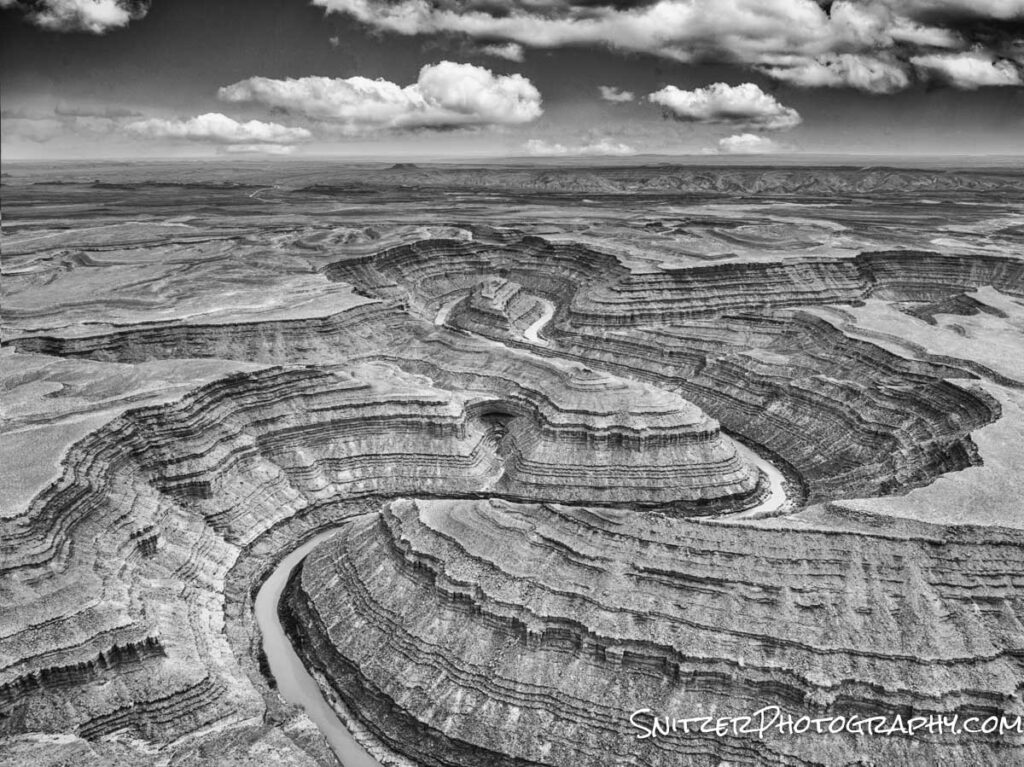 On to Arizona! My exploration focused on two areas, Lost Dutchman State Park and the Kofa National Wildlife Preserve.

This image was taken near my tent at 4 am. The cacti in the foreground are called Cholla (actually jumping Cholla). If you brush up on them, they release their barbed needles. Good luck getting them out. Incredibly nasty plants. I was darn lucky to avoid any accidents! 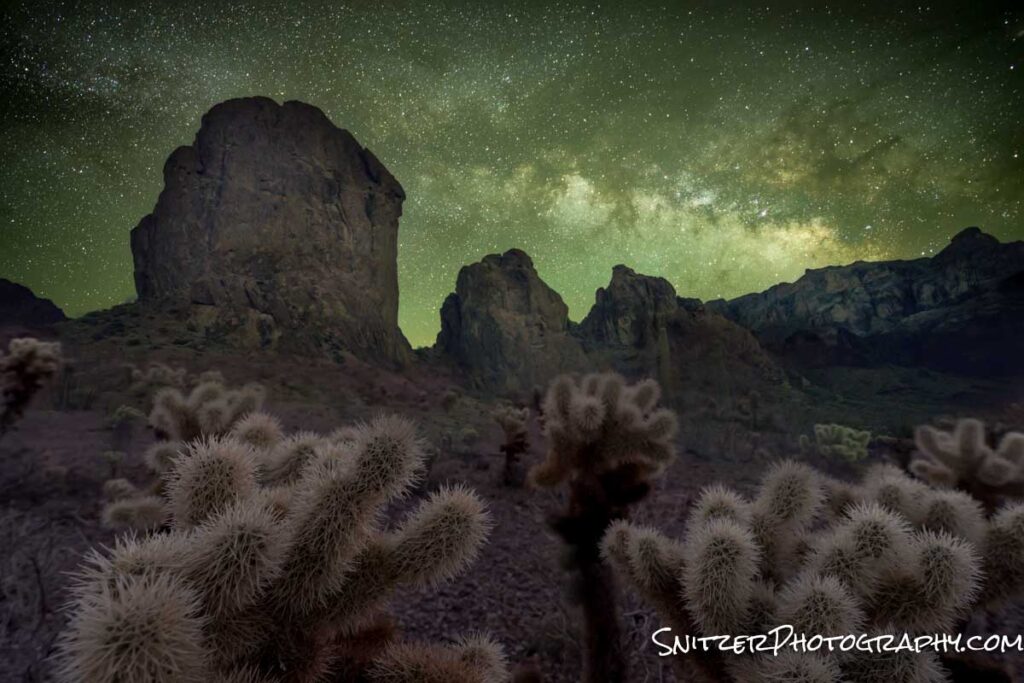 BTW, for our photo enthusiasts. The photo below was taken by shooting 13 images of the Sky (ISO 8,000, F 2.8, 17 secs) and stacking using Starry Landscaping Stacker Software. The foreground was shot 90 minutes later during twilight. The images were then merged in Photoshop.

The Cholla make great foreground objects and almost glow during sunrise or sunset! 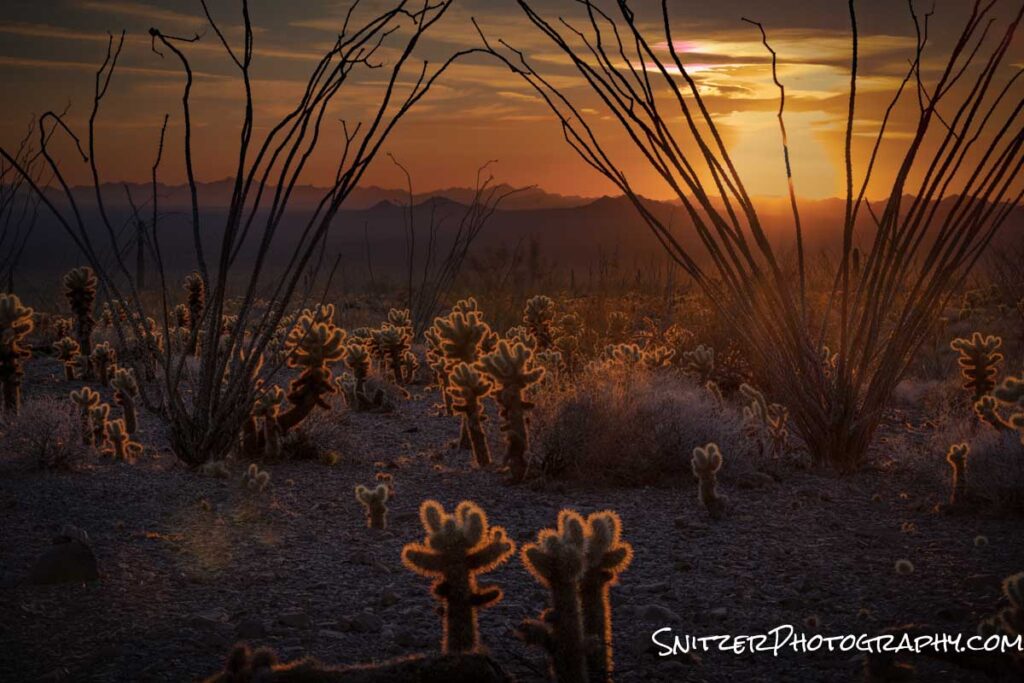 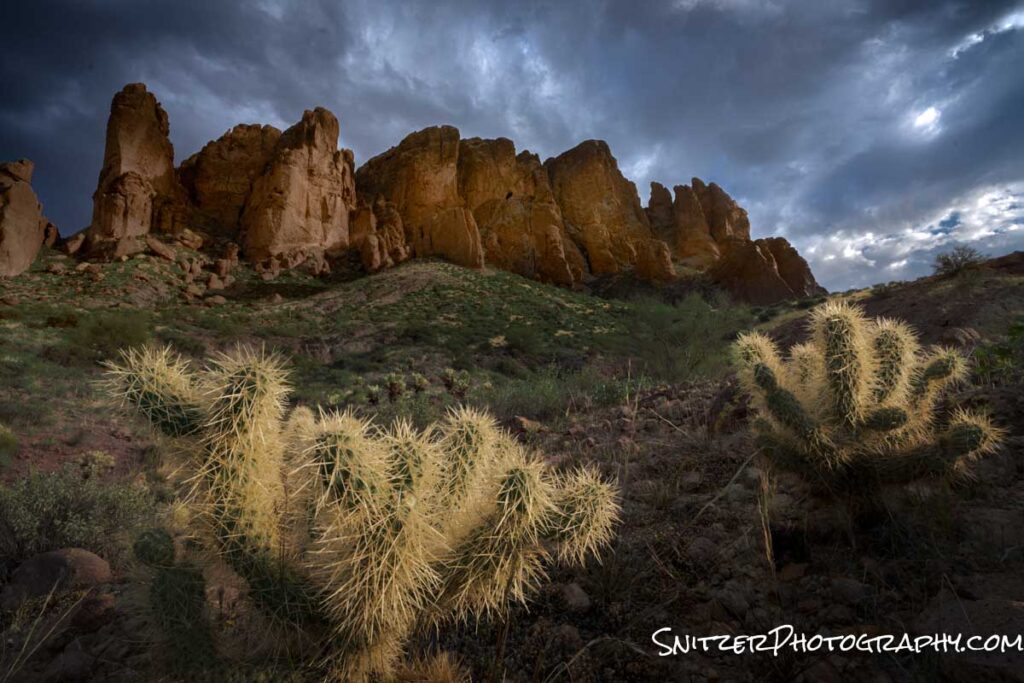 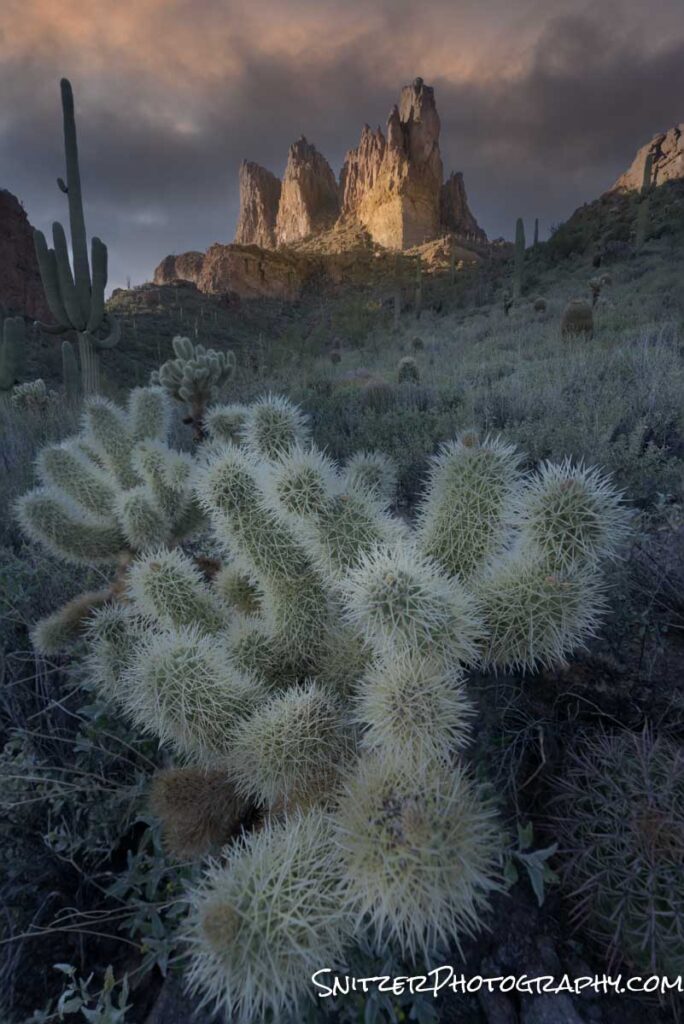 This guy is a Balloon Cactus plant. 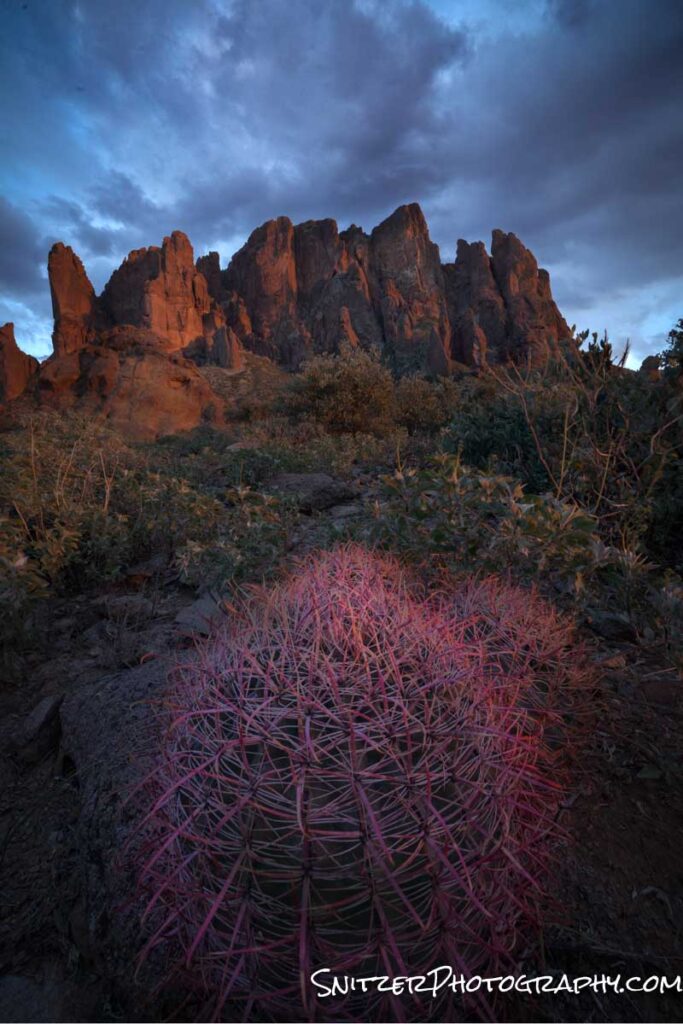 This shot features the Saguaro cactus (the really big guys). 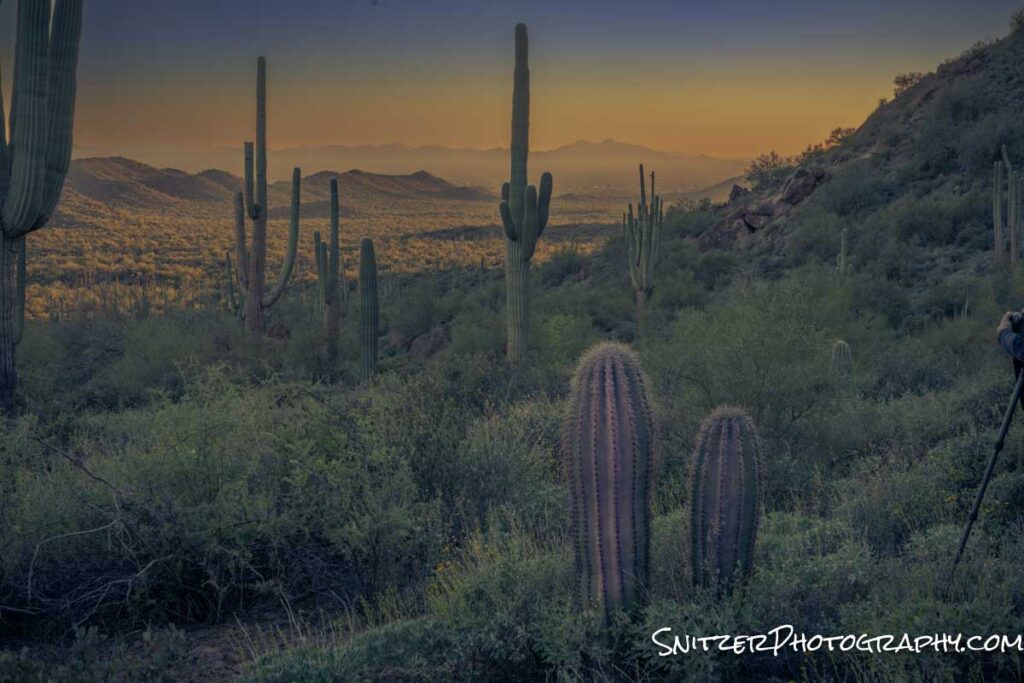 Get the Snitz Photo of the day!
Yes, I’m looking at you!!

Can’t wait for fall to hit the San Juans! Looks

Nothing beats a Norwegian sunset!

Shot with Spritzler drone about 1,000 ft over this

This is a real rainbow. Not photoshopped 😳

OMG it’s coming for our dock😳

A river runs through it.